Motivational quotes have a real power in our lives. They can create emotion and inspire action, cause deep contemplation and consternation. In Episode 16, Austin and I got together and shared a few of our favorites and discussed their meaning and application.
Here are the main quotes we rapped about. There are others sprinkled in as well. Check it out and let me know which one is your favorite.
“He who is waiting on the battlefield wins"
-Sun Tzu

“No plan survives enemy contact, you may start off fighting your plan, but the enemy gets a vote”
- Col. Tom Kolditz

"If you want something you have never had, you have to do something you have never done."
- Thomas Jefferson
"It is not the critic who counts; not the man who points out how the strong man stumbles, or where the doer of deeds could have done them better. The credit belongs to the man who is actually in the arena, whose face is marred by dust and sweat and blood; who strives valiantly; who errs, who comes short again and again, because there is no effort without error and shortcoming; but who does actually strive to do the deeds; who knows great enthusiasms, the great devotions; who spends himself in a worthy cause; who at the best knows in the end the triumph of high achievement, and who at the worst, if he fails, at least fails while daring greatly, so that his place shall never be with those cold and timid souls who neither know victory nor defeat."

Excellent written and that is info most valuable for safety purpose. Here is we also provide online firefighter training for interested guys.

This blog has a deep archive of training sessions that will remain available for your viewing. However the content moving forward will not solely focus on fitness. Rather it will be a discussion of all things pertaining to capacity, effectiveness and survivability on the fireground.
Yours In Strength!
Rayne
_______________________
This forum provides examples of strength and conditioning for professional firefighters and affiliated individuals (this includes anyone who's serious about their physical performance). This training is hard and requires a committed attitude, make no mistake about it. Fighting fire is a very athletic and demanding occupation requiring equal parts strength, explosive power, endurance and tenacity.

This blog contains daily workouts tailored to the needs of the occupational athlete. I would submit to you that all athletes, law enforcement, military servicepeople, and of course firefighters will benefit tremendously from this form of strength and conditioning.

Be advised that these training sessions are very physically demanding and will put you in a “hurt locker” if not scaled and modified to accommodate your current level of fitness. I can not presume to address your personal needs, you must watch out for yourself and be realistic about what you can and cannot do. What I can tell you is this: You must put in the work and the fitness will follow.

If you have not been consistently training it is my recommendation that you start with the 28 day beginner progression. I have provided scaled examples in the workouts each day. Choose a training intensity that is scaled to your current level of fitness or suited to your personal training goals. The levels are defined here: Level 1, Level 2 and Level3 These are guidelines to help you scale your workload.

Disclaimer: The strength and conditioning outlined in this Blog are a very demanding form of training. Do not start any training program without first consulting your physician.

As a professional Firefighter, certified Personal Trainer and former Jarhead I am always striving to be better prepared for the rigors of “combat” wherever that may be. I hope that you share this ideology.

Please, do not hesitate to contact me with any questions, comments or concerns: raynegray@firegroundfitness.com

The trainer behind Fireground Fitness

Rayne Gray, MS, CPT, has spent the past 25 years privately training and coaching endurance athletes and today works as a Fire Captain for a Major Metro FD in the South West. During his 20 years as a firefighter, he has directed his attention to the specific demands of the industrial athlete. Developing training models and coaching methods to address the unique demands found in the fire service. Additionally, he is involved in ongoing research to optimize firefighter health, fitness and safety. 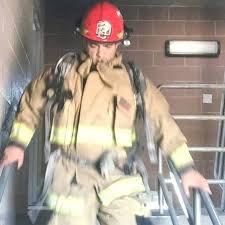 Resources on this site

Resources found on the web